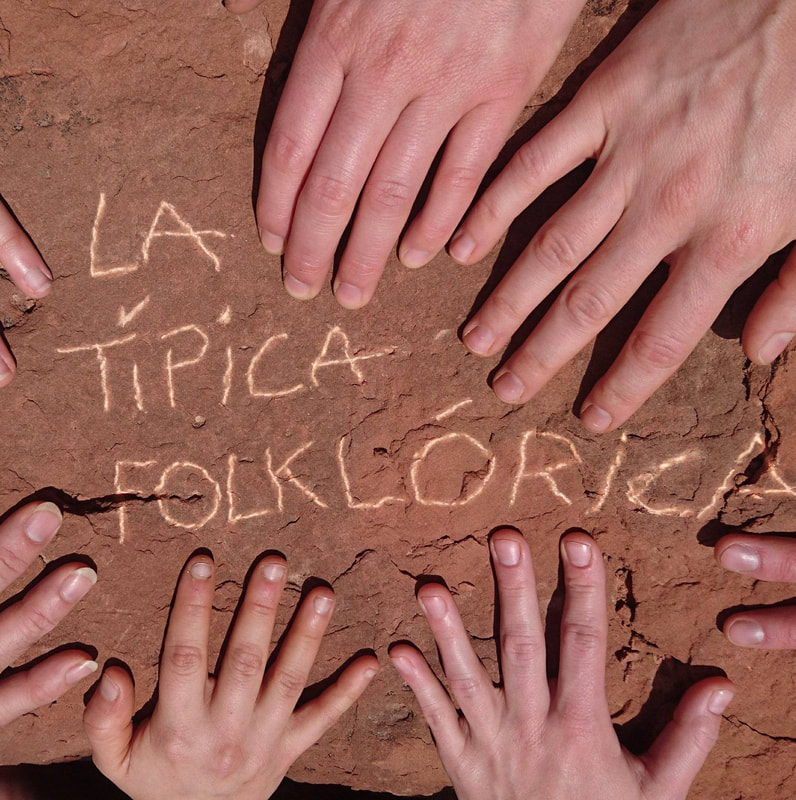 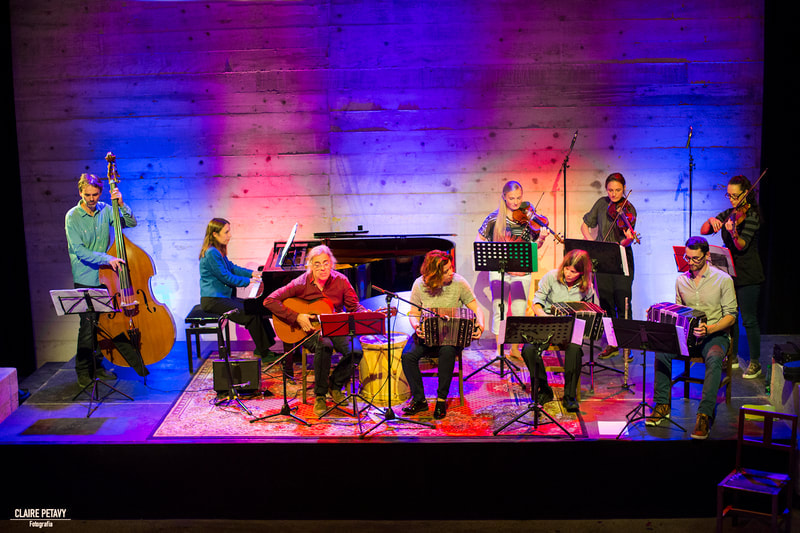 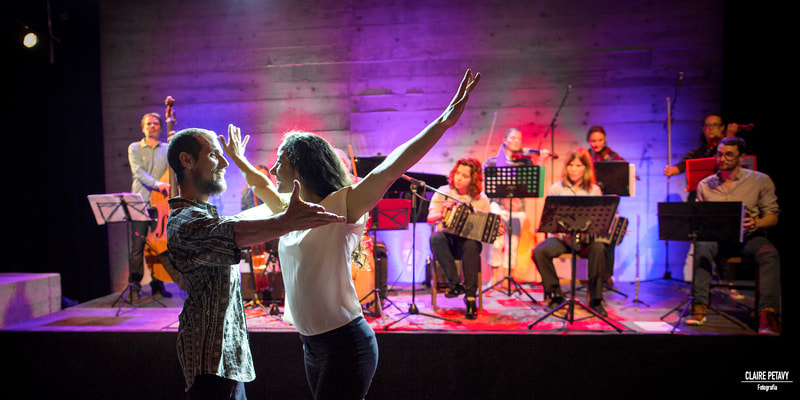 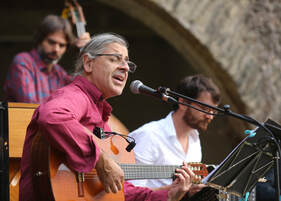 ​Alfonso Pacin - Musical direction, arrangements, violin, guitar, percussion and vocals
Born in Argentina, son of the pianist Evelina Aitala, Alfonso began his violin studies at a very young age at the Conservatorio Manuel de Falla. He soon became a member of the "Orquesta juvenil General San Martin" of the city of Buenos Aires and the "Orquesta sinfónica municipal de Olavarría".

As a musician, Alfonso has travelled the world's stages in the company of great artists of Argentine and international popular music, such as Tito Puentes, Quilapayún, Raúl Barboza, Mercedes Sosa and Stéphane Grapelli. He has been a composer, arranger and performer with the Trio La Tregua, the Alter Quintet, and currently with La Típica Folklórica. 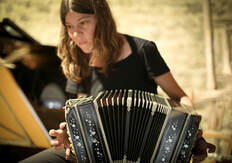 ​Marie-Anne Faupin -bandoneon, flute-
A classically trained pianist, Marie-Anne is also a flutist, bandoneonist and accordionist.
After a solid classical training at the Boulogne-Billancourt Conservatory, Marie-Anne opened up to other musical genres such as Argentinean tango, jazz, improvisation and French song.
She is currently a member of several Argentinean music groups, such as Duo Cabeceo, Les Tangoenophiles, Tierra Del Fuego and La Tipica Folklorica.
At the same time, she has developed an intense activity as a classical pianist (Duo Nomad, piano and chamber music recitals). Marie Anne holds a State Diploma and teaches at the Fresnes Conservatory. 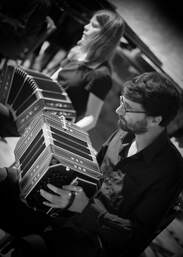 ​Alexandre Peigné - bandoneon-
He trained as an accordionist at the Conservatoire de Guéret, then at the Conservatoire National Supérieur de Paris. As an accordionist, he has played in many chamber music groups with eclectic and varied repertoires: ancient music (Duo Tangram), contemporary music (Ensemble Acouphène), popular music (Sofa/Buenos Aires, Soletan Quintet), musical theatre (Compagnies Opéra en Appartement, Minute Papillon, Collectif Le Foyer, Compagnie Mélusine, Compagnie Paris Lyrique).
His passion for Argentine music led him to train as a bandoneonist with Juanjo Mosalini at the Conservatoire de Gennevilliers and within the Orchestre-école Octaèdre. He is currently a member of La Típica Folklórica.
In parallel to his activity as a performer, Alexandre is a professor of artistic education and teaches in several conservatories in the Paris region. 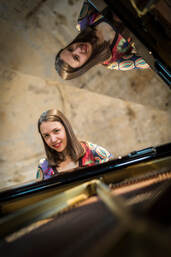 Anne Mazeau - piano -
​She began her dance and music studies at a very young age. She completed her classical piano training at the Aubervilliers - La Courneuve Conservatory.
Anne is pianist and accompanist of the choir La Quinte Juste and is a member of many chamber music groups. Her discovery of tango as a dancer in 2011 led her to develop a passion for traditional Argentine music and tango. She is currently a member of the Duo Cabeceo, and the ensembles Les Tangoenophiles and La Típica Folklórica.
A qualified teacher, Anne Mazeau is a piano teacher at the conservatory of Boissy-Saint-Léger. 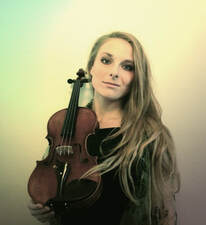 ​Weronika Rychlik -violin-
Born in Poland, Weronika began her violin training at a young age, which led her to obtain her Master's Degree with the double title of Master of Arts and Master's Degree in violin pedagogy.
At an early age she made recordings and gave concerts as a soloist, in chamber ensembles and symphony orchestras such as Dan Ross and Krzysztof Penderecki.
She travels with various groups to Mexico, the United States, Japan, Korea and the Caribbean.
In Paris she participates in baroque music ensembles such as Le Concert d'Astrée and Emmanuelle Haim, Marc Minkowski, Orfeo 55 with Nathalie Stutzmann.
Weronika is passionate about Argentine music, which is a new chapter in her career as a violinist, and participates in many tango and folklore groups, in particular La Típica Folklórica.

​Elsa Sissia - violin-
Elsa Sissia studied music and violin at the Lyon Regional Conservatory, where she developed an intense activity with symphony orchestras and in numerous chamber music groups. At the same time she is studying law.

In 2013 she began her activity in Argentine music participating in numerous workshops and as a member of the orchestra-schools Musique Ensemble and Octaèdre, with which she performs numerous concerts. Elsa also participates in various baroque music ensembles where she plays on period instruments. 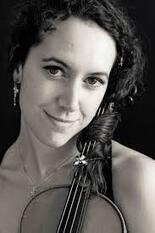 ​Caroline Pearsall - violin/viola
Working mainly in tango, folk and contemporary music, Caroline has toured Europe, Australia, Argentina, North Africa and the Middle East with groups such as Melingo, Fleurs Noires, Amelita Baltar, La Chiclana, Juan José Mosalini's Grand Orchestra, Silbando.... She has been heard on Radio France, Classic FM, BBC, ITV, Channel 4, 2x4 Buenos Aires and in many festivals such as Nice Jazz Festival, Oslo World Music Festival, Buenos Aires Tango Festival and the London Festival.
In 2011, she completed a Master of Music at Royal Holloway University of London in Ethnomusicology on Tango in Paris.
In 2014 she was awarded a Winston Churchill Fellowship, through which she travelled to Buenos Aires for two months to work on the history of the tango violin.
Her group, London Tango Orchestra released its first album Primeros Pasos in 2014 and the second Abrazo Abierto was released in 2021.
She has recently set up a music company for the events industry and is currently mounting a contemporary tango project with her string quartet Firebyrds. 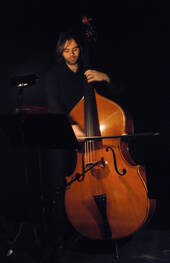 ​Romain Lécuyer -bass-
Graduated from the Conservatoire de Nantes, he participated in many workshops under the direction of Roberto Aussel, Bruno Chevillon, the Compagnie Lubat, Horacio Cabarcos...
He moved to Buenos Aires for three years where he developed an intense activity as a double bass player in tango, folklore and jazz. He was a member of the "Orquesta Escuela de Tango" of Buenos Aires, directed by Emilio Balcarce. He made recordings and toured in Argentina and France with the trio Grossman / Lécuyer / Ragusa.
In Paris since 2004, Romain has worked with the following artists among others: Cuarteto Cedrón, Los Quilapayun, Catherine Ringer, Ute Lemper, Melingo, Ophélie Gaillard, Toquinho, Rudi Flores, Pablo Murgier, el Alter Quintet... 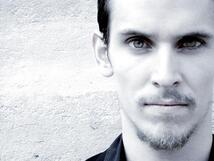 Born to a father who was an Argentinean folklore dancer and a mother who was a classical dancer and pianist, Georges Rocco Sedano has been immersed in an artistic world all his life. He studied piano for nine years at the Rennes Conservatory with Pierre Froment (a pupil of Alfred Cortot) and Éliane Froment. Later his father taught him Malambo (Argentinean tap dance), boleadoras (percussive dance instrument), Argentinean percussion, as well as jazz dance techniques, and his mother completed this work by teaching him the rudiments of classical dance.
These traditional percussive dances are his speciality and he will develop them with the help of his assiduous work in percussion and drums.
He has performed at the Théâtre de l'Orme, at the Peña Abierta in Paris, at "Un été à Bourges", at the "Tambor y Canto" festival at the Cité de la musique in Marseille, at the Eymet festival, at "Jazz à l'ouest" in Rennes, and at the Mondragon festival. He has also worked with Sylvie Thomas, from the company "Pies y manos", with the company of Magui and Anibal Pannunzio, the Cirque du Soleil in Valencia, and in Switzerland with Luis López, the company "Danse au coeur" in Berlin, at the festival "Color Tango" in Reunion Island, and at the Hanover Opera House 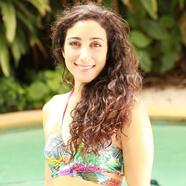 Her first introduction to folklore was in 2006, in Miami, by Los Latigos Santiagueños. Inspired and falling in love with "chacareras, zambas y gatos," Diane took master classes with Luis Lopez, Ann Bernard and traveled to Santiago del Estero, Argentina, where she did intensive training with Omar Silva. This collaboration led to several performances with Danza Asi and the creation of IN/Pulso (in partnership with Cuerpos sin Codígos). She now works with Luis Lopez, with whom she created ProYecto EnLaZos, presented in Europe and Canada, a show that combines their passion and mastery of the Boleadoras and Argentinean folkloric dance.

Milagros Caliva is a young and brilliant bandoneonist born in Buenos Aires in 1996. Her father comes from the province of Salta and her mother from Misiones. The music of northeastern Argentina (música litoraleña) marked her childhood and guided her musical path, which was guided by her grandfather, with whom she began to learn the bandoneon by playing in his band.
She then began a solo career, recording three albums that led her to participate in numerous chamamé festivals in Argentina and Brazil: Festival Nacional del Chamamé (Corrientes), Fiesta del Chamamé de Federal (Entre-Rios), Fiesta del Auténtico Chamamé Tradicional (Mburucuyá, Corrientes), Festival del Pomelo (Formosa), Campo Grande Do Sul (Brazil), Porto Alegre (Brazil), Sao Pablo (Brazil), etc.
Currently living in Buenos Aires, tango is also part of her repertoire: she approaches it in a traditional way, in a particularly rhythmically refined and constantly re-improvised style. She is in demand by many Argentine musicians and singers (Mateo Villalba, Gabino Chávez, Jairo...). Currently Milagros is part of the group Don Olimpio. She also animates peñas chamameceras throughout the year in Buenos Aires as well as milongas porteñas around a repertoire specially conceived for the dancers.